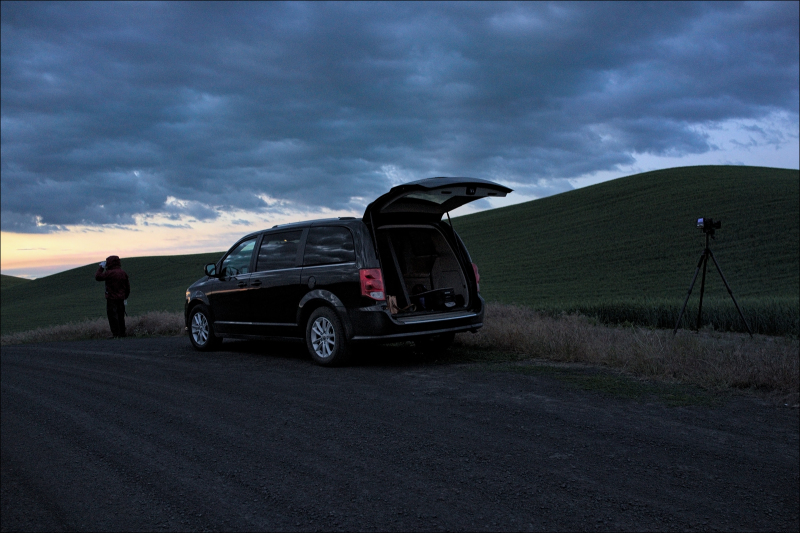 How sunrise landscape photos are taken...

Posted by Jeffrey (Scottsdale, United States) on 15 August 2018 in Landscape & Rural and Portfolio.

The first step, of course, is to get up well before sunrise, because "blue hour" -- the time when the camera records the sky as dark blue instead of black -- typically starts an hour before the sun rises and there are often good photos to be taken then using long exposures.

The second step is to drive to where the photo will be taken, which in an ideal world, you will have scouted previously, so you know how to compose the photo you want to take without too much screwing around while the "good light" approaches rapidly.

The third step is setup your camera, compose and focus your photo, take a few "test photos" to confirm you've setup everything exactly as you want, then wait until the light is right. (The test photos are especially important for confirming focus, because the optimal point of focus will often be in mid-air, hence not readily visible. Instead, you'll have to infer correct focus by comparing the sharpness of objects that are both closer and further away and adjust focus until they appear to be equally sharp if your goal is to maximize depth of field.)

Of course, it's often difficult to know exactly the moment when the light peaks, so you should probably take a lot of photos while you're waiting, because there are several other factors to consider as well, such as the positions of clouds in the sky, shadows on the ground, etc.

The fourth step is to decide when you've captured the photo you were after and it's time to move on to the next scene and next photo to be taken. This is roughly the point when this photo was taken, because my friend, Jeffrey, is ready to stow his camera and move on and is waiting on me to stow mine, too. (That's my outfit on the right side of the frame, with the 7" external HDMI monitor I use with it clearly visible.)

But I have a few more photos to take with it before I call it quits. Fortunately, thanks to the wireless remote control I use with it, I don't have to be standing near the camera to do so, but can simply watch the sky and the clouds as they change and take a photo remotely whenever things look interesting to me. Technology can be a wonderful thing sometimes, eh? 8^)

A larger, higher resolution version of this photo can be seen here: http://www.canyonero.com/files/1534116152.jpg

Yep. That's how it's done. And I notice the clouds may be putting a damper on the shoot.

@beach: Not at all, in fact! You weren't there, so you can't tell, of course, but IMO, the clouds were the only reason to still be photographing at that point. FYI, here's the photo I took that at that stop: https://audiidudii.aminus3.com/image/2018-07-10.html