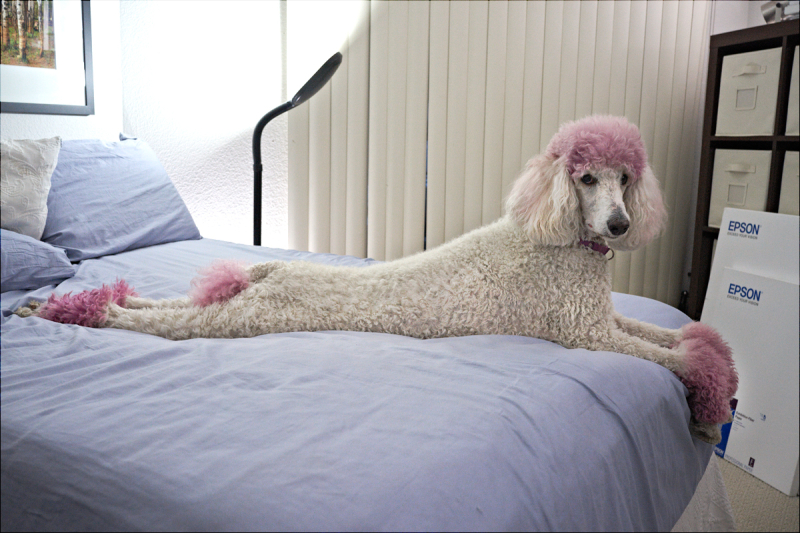 Posted by Jeffrey (Scottsdale, United States) on 11 June 2015 in Animal & Insect and Portfolio.

This past January, Audrey -- a black Standard Poodle whose company my family and I enjoyed for nearly 16 years -- had to be put down after suffering a stroke that paralyzed most of her right side. It was a crushing blow, although not one that came as a complete surprise given her age, and it was months before we even started thinking about the possibility of replacing her. But then we babysat for 10 days a pair of Maltese that belonged to friends and after having dogs around the house again, we realized the time had come for us to consider the possibility of bringing another one home for ourselves.

And by a serendipitous bit of luck, that same friend whose dogs we babysat was at a local pet store last weekend and spotted Abby, who was at an adoption event the pet store was hosting that morning. She wasn't officially available to be adopted, as she still needed to have some vaccinations, but my friend brought her to our attention and after a quick bit of negotiation and a visit to our house to make sure it would be an appropriate environment for her, the deal was done.

Her previous owner had dyed her purple -- Yes, purple! -- but her temporary caretaker groomed her and cut most of it away, leaving just the bits you see above to grow out over time. After being in our home for just a day, she is fitting in quite nicely and struck this pose as she stretched her legs while waking up from a nap ... incredibly, I had a camera in my hand and ready to go, and successfully captured this photo in the second or two before she stood up, shook off the sleep, and jumped down from the bed. To quote Rick Blaine, Humphrey Bogart's character in the movie Casablanca, "...I think this is the beginning of a beautiful friendship."

P.S.: Unlike many (most?) photographers these days, I prefer seeing my photos printed on paper to viewing them on a monitor. And unlike most photographers who feel the same way I do, I actually make my own prints instead of farming them out to a lab hence the boxes of paper visible in the background. Old habits die hard, eh? As always, if you'd like a print of any of the photos I post here for your wall or collection, please do get in touch with me, as I'm certain we can work out a deal to make this happen.