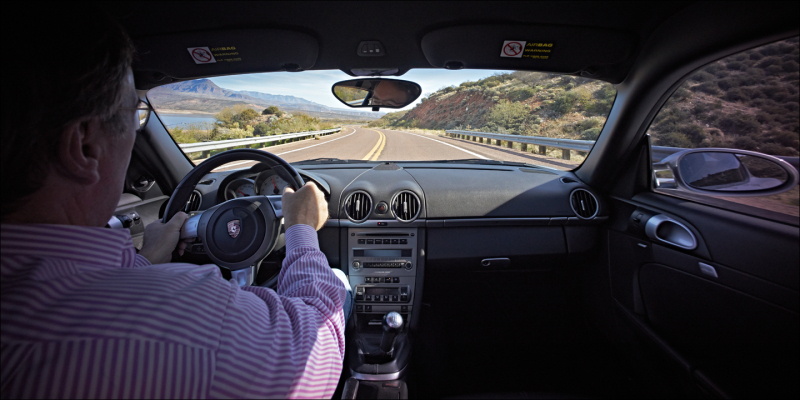 Posted by Jeffrey (Scottsdale, United States) on 12 February 2015 in Transportation and Portfolio.

For all his qualities, both good and bad, Martin Luther King now has a national holiday named after him that occurs in January. And national holidays mean significantly less traffic on the roads, because nearly all government offices and many private businesses are closed. So I decided around lunchtime it was the perfect day to go for a drive in one of the more remote parts of the state. Although this was to be a driving outing first and foremost, not a photography one, I also decided on a whim to mount a camera with an ultra-wide angle lens (15mm!) behind the seats (using a bracket I built to replace the luggage bar when I was still autocrossing the car and/or taking it out on the track), so I could take photos through the windshield while I was driving by using a remote release to trigger the shutter.

For the most part, this setup worked quite well at documenting my drive, although there's some magenta shifting and/or image smearing in the corners, as one would expect when using an older, non-retrofocus 15mm lens on a modern, 35mm-format digital camera. For my purpose, though, these issues mostly weren't, so I'll definitely be doing this again the next time I go for a drive!