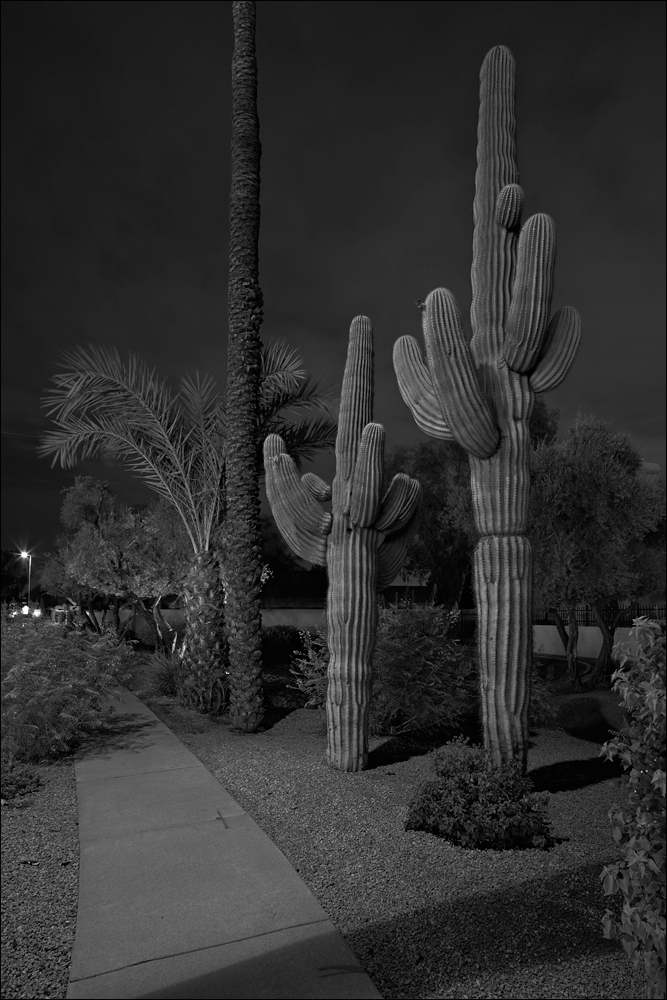 Posted by Jeffrey (Scottsdale, United States) on 28 July 2014 in Documentary & Street and Portfolio.

The light on this scene was provided by the convenience store/gas station across the street (as its name implies, it's conveniently open 24 hours a day), where I had just enjoyed a refreshing bottle of Mexican-made Pepsi. (As some who are reading this may know, the Mexican versions of big-name American soft drinks are sweetened using cane sugar instead of corn syrup, the same as they had been for decades here in the U.S., until they were all reformulated in the mid 1980s to use high-fruitcose corn syrup instead of sugar due to the rising price of sugar/falling price of corn.) If you ever compare the two versions side-by-side, it's almost certain that you'll prefer the sugar-sweetened version to the corn-syrup sweetened version* and in fact, there're some people who believe the reason that Coke revised its flavor in 1985 was because it couldn't make the switch to the less expensive corn syrup and keep the taste the same. Of course, by the time they finally yielded to public pressure and reintroduced the so-called original Coke flavor a few months later, they had a much easier time of it, because by then, there was no way for most people to directly compare the taste of the two versions -- supplies of the original version had largely been depleted -- and few noticed the difference in taste that resulted from the reintroduced original version now being sweetened with corn syrup instead of sugar. Was this the huge marketing disaster that many claimed or a clever, cunning plan to increase sales and profits simultaneously? I'll leave that to you to decide, but will note that on those rare occasions when I do have a soft drink, it's definitely hecho en Mexico for me, gracias.

I tried several times in the past to photograph this scene, but was never happy with the results because none of the lenses available to me were wide enough. This has now changed, because when mounted on Sony's a7R body, my much-loved Contax N 17-35/f2.8 zoom is once again a true 17-35, not effectively a 26-53 or 34-70 zoom due to the crop factors associated with the smaller-than-full-frame, 35mm format sensors I've used since going all-digital in 2007. This lens was designed by the German optical firm, Zeiss, and as is a characteristic of many of their lens designs, it has the uncanny ability to make 2-D photos appear almost 3-D at times, especially when they're in color. However, as evidenced by this photo (as well as the photo I posted yesterday), this sense of 3-D-ness is often present in B&W photos taken with Zeiss-designed lenses as well....