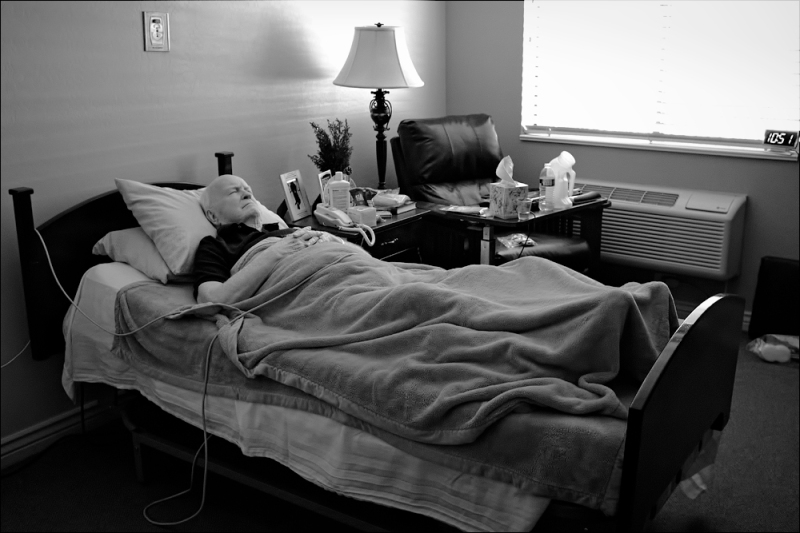 Posted by Jeffrey (Scottsdale, United States) on 26 January 2014 in People & Portrait and Portfolio.

If you've been wondering why the only photos I've posted for the past seven weeks have been from my outing to the Salton Sea back in early December, here's the reason: On December 16th, while hanging Christmas lights on a tree in front of my house, my 78-year old father lost his balance, fell, and crushed the head of the femur of his left leg. He had surgery to repair the break on December 17th and was released from the hospital to a rehab facility on December 19th, where he has been living and receiving intensive physical and occupational therapy at least twice daily ever since. (As seen here, he's napping between therapy sessions.)

Fortunately, the rehab facility is only .6 miles from the house, so my sister and I are able to visit him daily (and sometimes several times each day) and he's making good, steady progress recovering. Unfortunately, stepping into his shoes (only temporarily, I hope!) has left me with little time to get out and take any photographs, so I have had to scratch the itch, so to speak, by working with photos that I've already taken; ergo, all the Salton Sea photos I've been posting.

His follow-up appointment with his surgeon is February 4th, at which point we hope he'll be cleared to return home. Until then, however, I'm working from a short tether, so please bear with me for a bit longer, as I hope to be getting out-and-about with my camera again soon!

very nice image, I hope he is doing well..

For the most part, he is doing as well or better than was expected and his spirits remain good ... thanks for the kind words!